Click on any picture to get a HUGE (about 200k) version.
Town maps and lift maps on a different page.

All of the pictures on this page were taken on March 13, 1999. It snowed all yesterday, even after the lifts closed and some during the night. Today when I got up it was BEAMING down sunshine, on top of about 12 inches of nice new snow. A truly epic day. I warmed up in the morning on Lift 9 and Lift 6, but because it was Saturday, and because there was fresh powder and sunshine, there were some crowds and lift lines. So at 1:30pm I decided to do the 45 minute hike up past where the highest lifts go to "Gold Hill" which is 400+ vertical feet above the highest lift in Telluride at an outrageous 12,247 feet. This is the first time I ever did this hike. Click here for a lift map showing Gold Hill at the very top center of the map. This web page is about my day...

This is Telluride's main street at 9:30am. I paused to take the picture on my walk to the lifts. The Oak Street Inn (where I'm staying) is half a block to the left and lift 8 is about 2 blocks to the right. I'm standing at the intersection of Oak Street and Main Sreet. Where I'm standing on main street in Telluride is at an altitude of about 8,800 feet. Doesn't this seem like the perfect day to climb up to 12,250 feet? 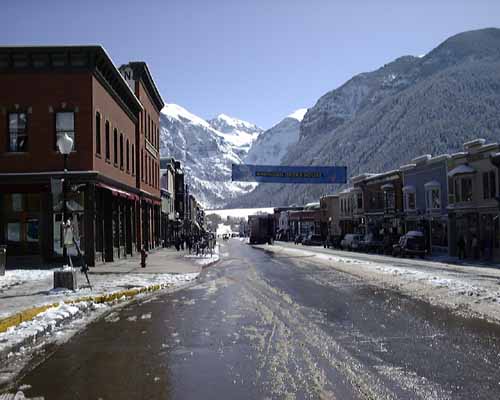 After warming up in the morning, I did the run under chair 6 (Allias Alley) to look for Lise if she was around. Lise wasn't there, so I decided at 1:30pm to do the hike alone. The weather and snow were perfect, and lots of other people were hiking up so I wouldn't be up there alone. In general, it really isn't very smart to ski alone, ESPECIALLY up above where the lifts go, on double black diamond avalanche chutes, where the cliffs aren't marked exceptionally well, especially your first time up there when you don't know where everything is and haven't scouted it out yet. But with other skiers around, and if you're extremely careful and THINK before bombing down the hill without a care, I think it can be done in reasonably safely.

The hike up Gold Hill begins at the top of chair 6 at an elevation of 11,800 feet. You can't imagine how hard it is for a "flatlander" like me (who lives at sea level) to walk uphill in alpine ski boots at this elevation until you've lived it. I can take about 20 steps, then I have to stop and wheeze and suck wind for a minute or two before I can continue. If anyone knows the percentage of oxygen in the air at 12,000 feet as compared with sea level, I'd like to know. This hike is supposed to take 30 minutes, and took me at least 45, but then again I program computers (while sitting on my butt all day) for a living at sea level.

About 5 - 10 minutes into the hike, the first run appeared. Below is a picture of the run, which I believe is "Giant Steps". I wasn't interested in bailing out of the hike just yet (I wanted to see the view from the top), so I passed this chute by: 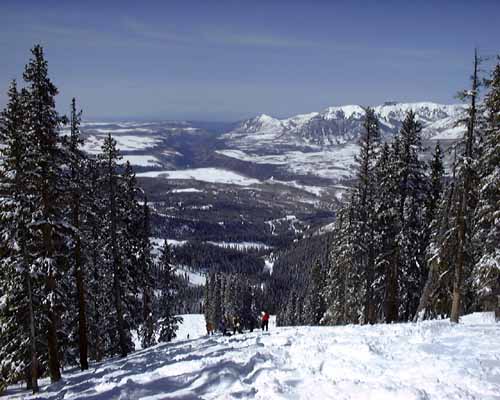 Now along the hike comes the STRANGEST darn thing I've seen this trip! The next three pictures show a PRIVATE RESIDENCE sitting at 12,000+ feet in the middle of federal land in the middle of a ski resort. You have to understand this-> this home is a 15 minute hike ABOVE the highest lift. The locals tell me this home belongs to Eric Trommer and his wife Rosemerry. In this first picture, I'm standing uphill from the house, and you can see the trail I just hiked up to the right of the house: 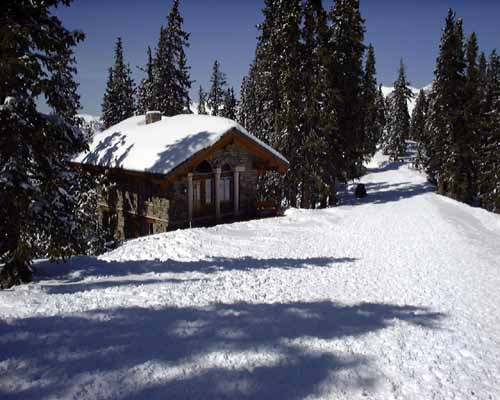 As I understand it, Eric somehow figured out that there was an old mining claim (private land) sitting up at this altitude in the middle of this federal land, in the middle of the Telluride ski mountain. So Eric, (and I'm guessing and filling in a lot at this point), being a complete loonatic and loaded with cash, buys the mining claim, and probably with helicopters drops all the supplies and builds this incredibly cute, charming, solidly built home in the most INSANE location on earth. Stay with me here, even by snow mobile he would have to drive from the bottom of the ski hill to get to his home which probably takes 45 minutes to an hour even at high speeds in GOOD weather, and talk about the potential to be stranded! But I have to tell you, as strange as it is, he did a wonderful job on the home. Here's a better close up picture. Those are my skis in the foreground: 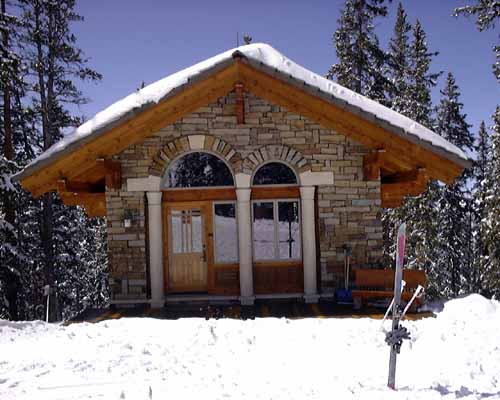 The ski run behind and below his house is called "Trommer's Trees", and I believe is part of his private property, although I also believe Eric allows it to be skied by anyone who wants. This next picture is taken through Eric's front window to get a peek at the insides, which are beautifully done. I believe that's a hand painted floor, and we're looking in at the kitchen and living room, and those spiral steps lead up to a loft. There's another floor below this one facing out over the mountain. Forgive the glare off the window: 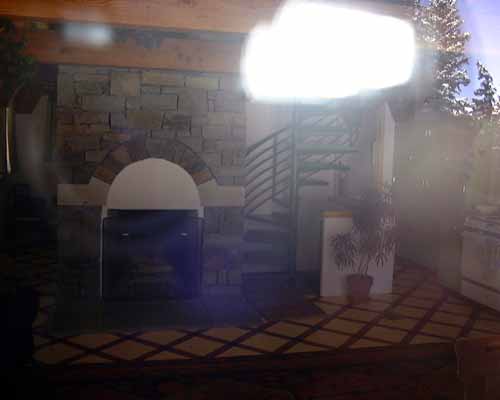 Continuing along my hike, this is the view of the back of the ridge on the opposite side of the ridge than I'll eventually ski down: 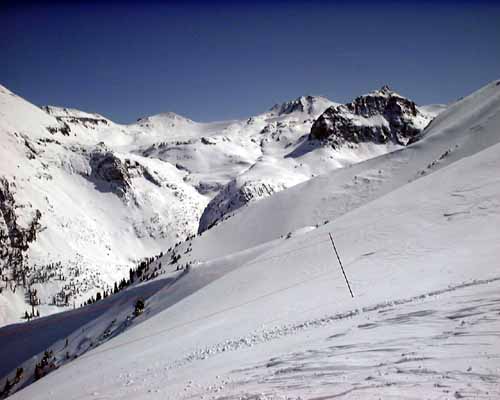 This is a picture taken from about the same spot, but facing the opposite direction, down the box canyon, over the ski resort, in the direction I'll eventually ski. You can see the airport in the distance. Click here to see a closer picture of the airport with a red circle around the runway, taken from MUCH lower down on the ski hill a few days earlier. At the bottom of the picture you can see some ski runs: 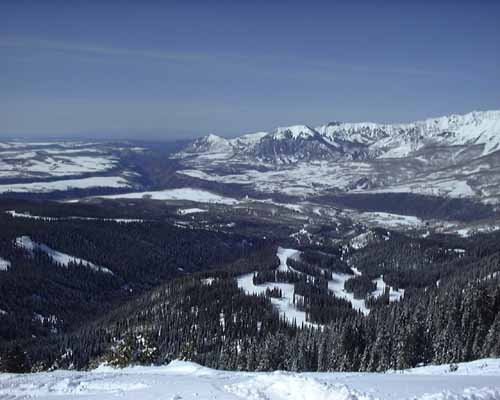 This picture is again over the closed side of the ridge (you can see the skull and crossbones "closed" sign in the foreground). This is pointed more back downhill and towards town: 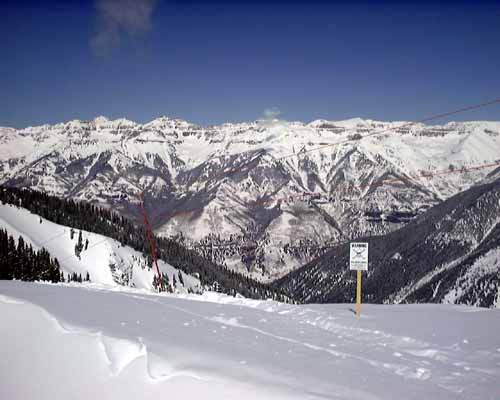 From higher up, again down the box canyan: 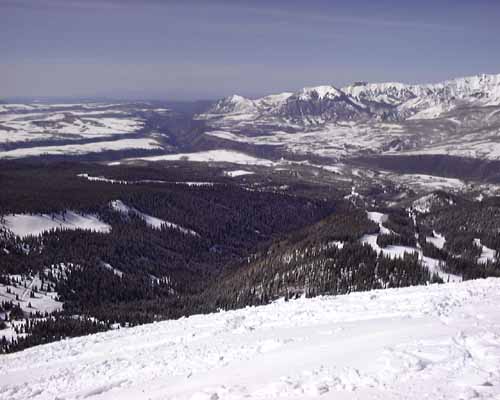 This shows the path I just hiked up, with a bunch of other people on the path hiking up. This hill was the steepest part, and it almost killed me through oxygen deprevation. :-) 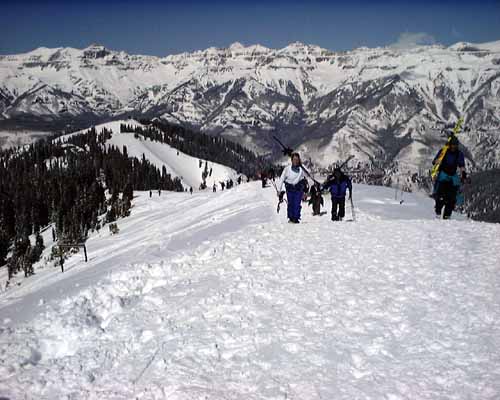 I made it!! This is me at the summit of Gold Hill, at 12,247 feet. Picture taken by a nice stranger. The chute dropping away behind me and to the right is "Little Rose" if you want to find it on the lift map: 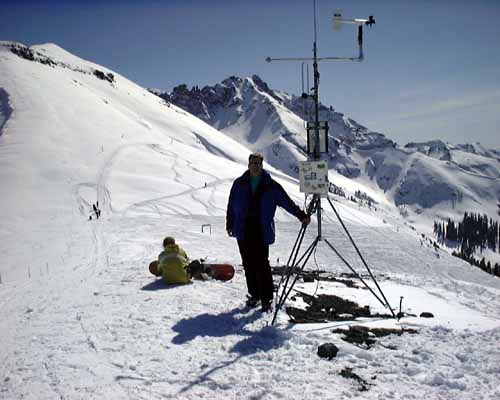 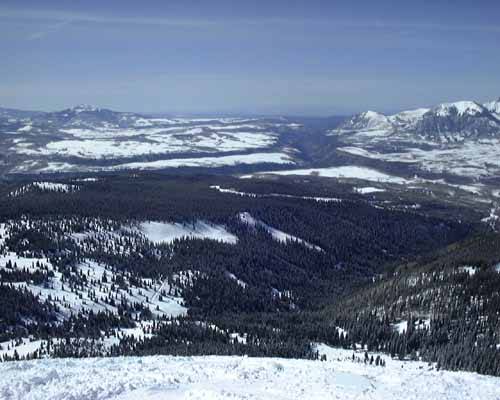 These are some people almost up to the summit where I'm standing, walking up the ridge. You can see it drops off to both sides, to the left is the ski area: 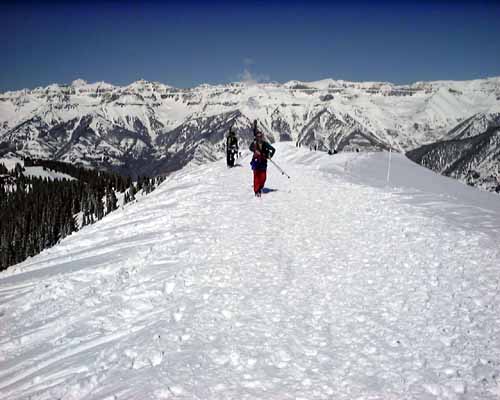 This was taken standing at the summit, looking down over the edge where several people have now disappeared (skiing down). You can't see them can you? I wonder if they are still alive... :-) 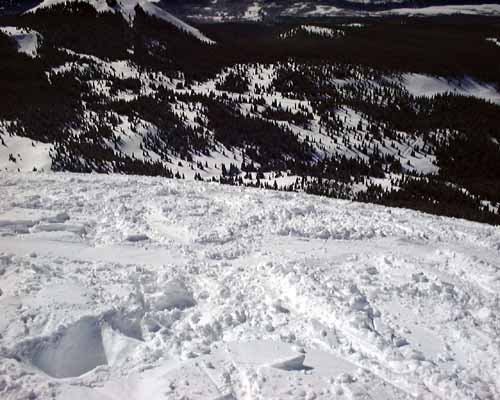 After conferring with some snowboarders and skiers at the summit, I decided to drop down through the run called "Little Rose". The main reason was that it was nice and wide open, and I could see everything, and there were no tricky cliffs or other hazards to avoid. Here I am at the top of "Little Rose", looking down into it: 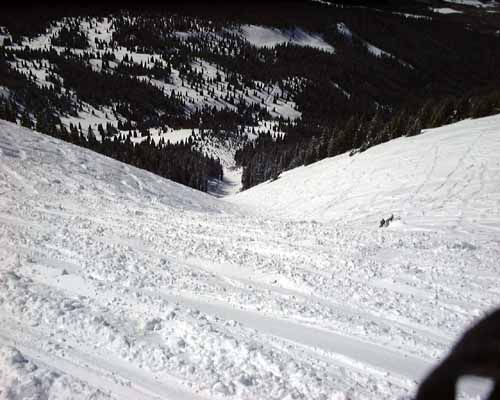 And here I am at the bottom of "Little Rose", staring back up at what I just came down. You can see the top of the ridge where I started (at the top of the picture): 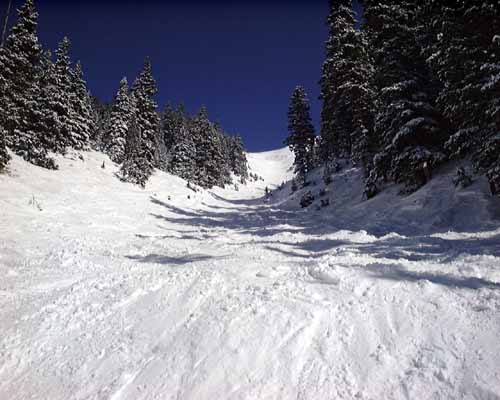 A little further down, I ran into the cat track called "Prospect Trail", and Keith was sitting there hanging out with a few friends. Here's a picture of Keith, just down off Gold Hill himself: 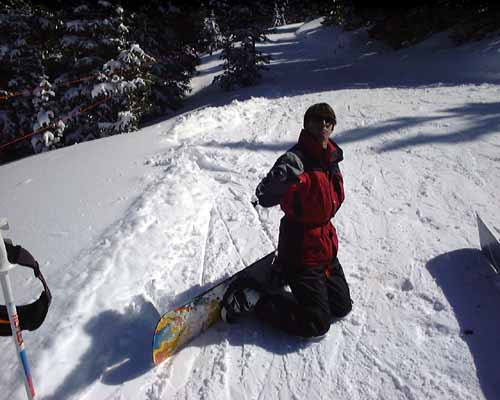 From that same spot, here's a picture of Gold Hill and the run I just came down. You can see "Little Rose" is the big open "Y" of a chute to the right of the picture (an inch left of the tree in the foreground on the right side of the picture). I came off that summit, and then through the lower trees you see! 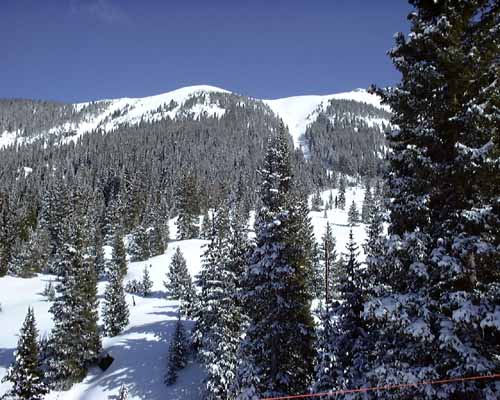 After dropping down through "Prospect Trail", which Keith called a "bob-sled ride" and was TONS of fun going full bore, it was already 3pm, and I decided to call it a day. Here, back on the main ski area slopes, is a picture of Telluride as I dropped down onto it. This picture was taken from the run "Lower Lookout": 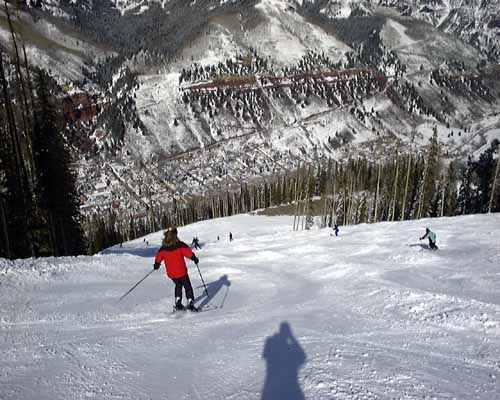 And finally, at the end of the day, I sat out on this patio at the bottom of chair 8 and had a pint of beer to celebrate my successful solo summit of Gold Hill. The hotel is called the "Camel's Garden", and the patio is part of the bar: 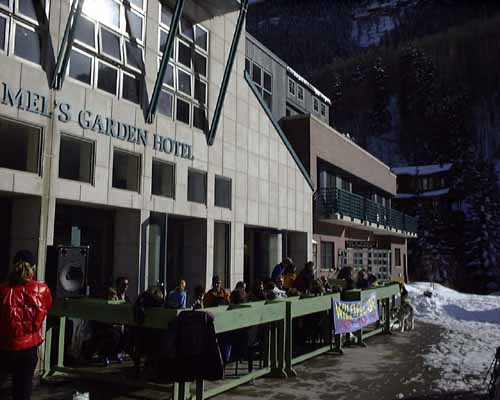